LeanderARW spent numerous hours of research, held many discussions with parents and community members, and thoroughly reviewed the Republican Party of Texas' platform regarding education to provide important information on LISD Propositions A and B. We acknowledge the shared concerns of a large portion of this community in that Leander ISD has become a low-accountability school system that is academically, socially and fundamentally failing our children. It is critical for the future of this district for you to deeply consider the intricacies of each of these propositions before heading to the polls.

Reason to Vote YES on Propostion A
Currently, the Texas Education Code only provides one option that allow taxpayers to have a say in how our district's recapture obligation is satisfied. That is Option 3 listed below. The other options require involvement with other school districts, negotiating the tax base or educating students from other districts at our cost. The purchase of average daily attendance credit is the cheapest option and if this proposition does not pass, the Texas Education Agency (TEA) may be forced to mediate to ensure LISD makes their recapture payment. Delaying recapture only avoids the inevitable and will leave our district in a state of ambiguity.

WHY DO WE HAVE TO PAY THE STATE OF TEXAS?
Because LISD student enrollment dropped below the amount of tax revenue permitted based on the average student enrollment LISD has a surplus of school tax revenue that must be repaid to the State of Texas. In August the school board voted unanimously to place Option 3 on this year's ballot to allow voters to decide if the purchase of daily average attendance credit is the appropriate action to satisfy our recapture obligation. The other options do not require a voter referendum but instead, give the Superintendent the ability to combine any of the other options and negotiate with other school districts.

Reasons to Vote NO on Proposition B
Reason No. 1 - Broken Trust:
The LISD Superintendent has broken the trust of parents and it shows in student enrollment numbers. Why? We have identified several reasons below, but the main reason is that he is not listening to the parents. For example, it’s clear that the book review process failed. It was a poorly managed, lengthy and arduous process that left parents with no other option but to withdraw their children from school. In fact, since enrollment went down, the staffing increases originally approved in the previous budget year for the 2021-2022 school year were, in fact, never hired by the current LISD Board of Trustees.  You can’t fire what you did not hire in the first place. The budget and subsequent reason why Proposition B is on the ballot now, was based on a projected enrollment of 43,808 students.

The reality is many parents are already on a waiting list for charter/private schools or are opting to homeschool instead. Students in economically disadvantaged environments are the most vulnerable, since neither of these options are available to them.

WHY IS LISD SCHOOL BOARD ASKING FOR A 35% INCREASE IN TAX REVENUE IN THE M&O COMPARED TO LAST YEAR? (Net $40M 11.5% increase YoY)
Next year’s LISD budget is based on a decreased I&S (debt) tax rate. The .333 rate was already approved by the Board and did not require a voter referendum. If Proposition B does not pass, the M&O rate would then decrease to .855, thus the total rate would go down from 1.337 to 1.188.

However, it is important to note that teacher pay raises were also already approved in next year's budget and are included in 2022 (w/o VATRE) shown below. The reason for this is due to the increase of homes in the LISD school district, which means the rate can decrease and still provide the same or additional tax revenue as the previous year.

Reason No. 2 - CRT/SEL DOES exist in LISD:
Instead of learning academic basics and striving for excellence, a non-cognitive shift using surveys to assesses a student's values, attitudes, and beliefs is becoming the focus of the classroom at an alarming rate. Critical race theory, subjective social and emotional theories and assessments, and sexual orientation issues do not belong in our classrooms.

Through a conversation with a parent, we learned of an unusual response to gender identity from a middle school principal. When this parent asked the principal why their child was being asked, every day, how they wanted to identify, the principal explained this was common for some of the middle school teachers to ask of their students and when the parent asked what the school would do if a child identified as an object, the principal responded, "we have science to help with that." Scientifically,  there is a multitude of unique physiological characteristics that identify us as female or male but educators are now undermining this existing science and replacing it with pseudo-science about how humans cannot be an object? The parents have since removed their child from the LISD middle school and have chosen to home-school instead.

Reason No. 3 - Pornography:
Even if just $1 spent, LeanderARW will never be in favor of any authority over children that makes pornography available. LISD cannot hold those accountable who choose to purchase SEL books (2021 and 2022) thus making pornography readily available. Remove it all from the approved library lists in Texas schools.  Since LISD bought the books, they should take the responsibility to remove the books.

Reason No. 4 - Parental Rights are Restricted:
Students are being given the choice to list their counselors and teachers as "safe adults" creating a divisionbetween the child and their parents thus denying the parent their job as primary caretaker. This is happening without notification to the parents, who are a child's best advocate and this puts school staff in a position for which they are not paid to take responsibility. LeanderARW encourages everyone concerned with the functionality of this district to get involved as a volunteer and strongly recommends schools to allow for more volunteering opportunities.

Reason No 5. - LISD is not Getting Back to the Basics:
Compared to other Texas school districts LISD is performing well below average. Yet the school district wants the voters to approve a $40M increase in tax revenue (11.5% YoY) at a time when we are experiencing a recession? More than ever, our schools must get back to teaching the building blocks and basics of academic excellence that made America great.

We all want what is best for students but proposing a budget to fund AI technology, when students can’t pass the basics to get into college, does not make sense. Especially in a time when it is becoming harder and harder to afford groceries, gas etc., we should be investing in teacher salaries. Let’s make sure the dollars that ACTUALLY go to teachers’ salaries,  so they too are able to pay their bills, and balance the budget with the right priorities. LISD should not ask the voters to foot the bill for poor school performance.

COMPARED TO OTHER TEXAS SCHOOL DISTRICTS HOW IS THE DISTRICT PERFORMING?
LISD STAAR - EXECUTIVE SUMMARY

Do not reward a failed system and poor budget.  LISD has made their commitments to debt, and they must use their money wisely, and get back to the basics. Vote NO on Prop B. 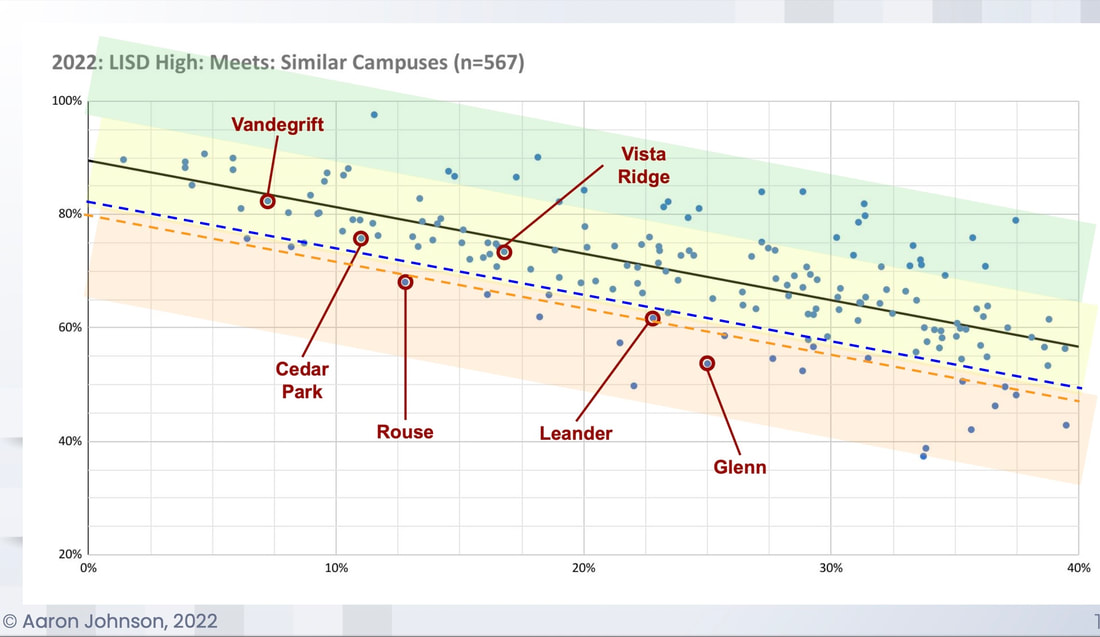