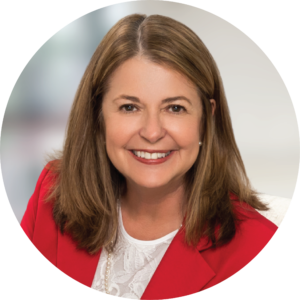 Kit Whitehill is the 2022-2023 TFRW President. She previously served as the 1st Vice President-Special Events, the Community Engagement Chair, and the 2017 TFRW Convention Chair. She has presented at numerous TFRW Nuts and Bolts Trainings, and at the 2019 NFRW Region III Training held in New Orleans.

Kit has made a great impact on the local level as well, founding the Coppell Republican Women in 2012 and serving as their President three times and Programs Chairman twice. She is a Dallas County precinct chair and served as the Dallas County GOP Secretary for 5 years.

Kit was the Campaign Manager for her husband, Justice Bill Whitehill of the Fifth District Court of Appeals in the 2012 and 2014 elections. In 2014, the Dallas County Republican Party named her a “Volunteer of the Year” and in 2015 the Coppell Republican Women’s club was honored to be named the Dallas County GOP Club of Year.

She was appointed by Governor Abbott in 2019 to serve on the Texas Motor Vehicle Crime Prevention Authority.

Kit and her husband Justice Bill Whitehill have been married 42 years. They have three children and five grandchildren. They have lived in Coppell since 1993 and are active members at Valley Ranch Baptist Church.